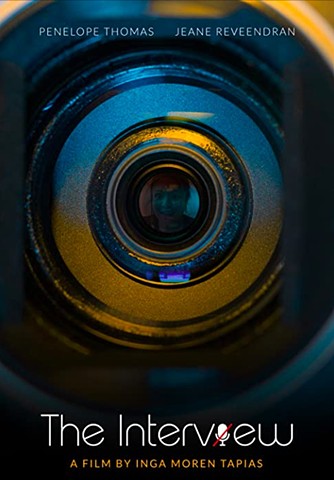 An interview between two women at opposite ends of their careers turns into a therapy session where we question: Who is interviewing whom?

Director Inga Moren Tapias and I were so happy to be at The Women's Film Festival in Philadelphia for the world premiere of The Interview in August 2022! With laurels from Busho (Budapest Short) Film Festival; MOM Film Festival; Hell's Half Mile Film & Music Festival; Port Townsend Film Festival—and more rolling in each week, we're heading into a great 2023. Writer Janet Guillet truly understands the stories of women who wrestle with belonging, failing, succeeding, and being seen.

We had all kinds of adventures filming this pandemic-era project remotely. Costar Jeane Reveendran and I received packages from the art department in Europe to dress our apartments. Art for the walls, instructions on how to create an ombré stack of sweaters in my closet, fake plants, how to fluff pillows...adulting, basically. The actors ran our own sound and cameras, gaff tape all over my bathroom mirror and everywhere else, random attacks on important cabling from my excited cat—all with real-time collaboration from film professionals all over the world. Then MONTHS in post production with a stellar team tuned it an actual film.

Thanks to my husband Rob, whose IMDb credit doesn't cover the fact that he built an Ikea table for the movie, and rented office space while we took over the apartment for filming so he could write his grad school entrance essay...and was my entire craft services. Special props for the bratwursts from our local Ukrainian butcher, honey!